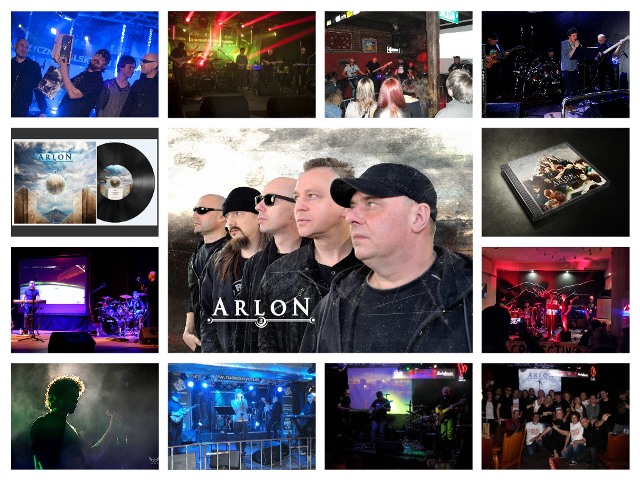 Formed in Przemyśl (Poland) in 2009, Arlon is a Polish progressive rock band. In 2013, the group featuring Jacek Szott (saxophone, keyboard and composition), Wiesław Rutka (guitar), Maciej Napieraj (bass), Paweł Zwirn (drums) and vocalist Paweł Szykuła, releases their first studio album ,,On The Edge”. The album receives very good reviews and in March 2014 wins the prestigious First Prize of “The Werbel 2013” (a competition for the best album of the year 2013 ) awarded by the Polish Radio Rzeszow. The year 2013 is for the band the time of promoting the album “On the Edge”. The band gives concerts in many places all over Poland, including Warsaw, Cracow, Katowice, Lublin, Rzeszów and Przemyśl. At that time the band performs at a prestigious Polish festival, the 7th Festival of Progressive Rock in Gniewkowo, and participates in the first historical concert of Rock Area On Stage in Katowice. The latter, with a guest performance of Clive Nolan ( Arena, Pendragon ), takes place on 21 November 2013.

The Album “On the Edge” also receives positive reviews in France, Italy, the Netherlands, Egypt, Brazil, the UK and the USA. Nominated by several websites and radio broadcasting stations for the best progressive rock album, the band markedly makes its presence on checklists in 2014. In the same year Arlon’s lead singer Paweł Szykuła leaves the band.

The Sinfonietta Consonus Symphonic Orchestra www.sinfonietta-consonus.com, appears in three tracks from the new album by Arlon. The recordings started on 29 November 2014, and were completed at the end of May 2015. 43 musicians and a choir were engaged in the project. The new album “Mimetic Desires” is about a 52-minute record with music composed and arranged mainly by the group leader, Jacek Szott and with some pieces composed by a classical guitarist and the group vocalist, Wojciech Mandzyn as well as by Wiesław Rutka, the guitarist of Arlon. www.arlon.art.pl. On August 23, 2015 the group performed at the Cieszanów Rock Festival.

Currently a video promoting our new album is being made. At the moment Arlon is beginning a new concert tour and is giving a concert at the Prog the Night Festival in Łódź (November 11, 2015).

↑
We use cookies to ensure that we give you the best experience on our website. If you continue to use this site we will assume that you are happy with it.Ok